About Underwater Photos of the World by Wolfgang Poelzer

Wolfgang Poelzer was born in 1969 in Hallein, a small town on the countryside of Austria in Europe. He is one of a few in his country, who is taking underwater photos as a full time job!

He did his master in Biology with a work about the little Goby "Gobius bucchichii", the only anemone fish of the mediterranean sea at the University of Salzburg/Austria in 1994. Besides he was sometimes working as dive instructor. Taking part and winning in many photo competitions, he is quite well known as underwater-photographer. Among a lot of international prizes, there are specially worthy of note: The gold medals he got on the CMAS-World Championship Of Underwater Photography in 1998 (category "macro" and in 2002 (category "wide angle"). And also the gold medal on the Antibes Festival in 2000 (category "black & white"). Since he is working as a professional photographer he stopped taking part in photo competitions.

Today Wolfgang Poelzer is working as a free lance journalist and photographer for several diving-, travel- and nature-magazines. He also works for international stock agencies and writes books. In his underwater photography he is not limited - he does not care about water temperature or sea- or freshwater. He likes to take pics of whales in tropical waters just in the same way as babies in Austrian pools. 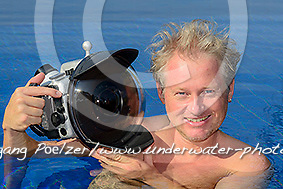 Sponsors:
Wolfgang Poelzer gets powered since many years by MARES, a worldwide leader in the manufacturing and distribution of state-of-the-art diving equipment.
www.mares.com